Going one step further to a full-blown valuation class for sustainability professional is a bit more problematic. Most finance professionals do not work with sustainability issues and environmental professionals do not usually pursue skills in corporate finance that would allow me to go over the nuts and bolts of valuation in an executive education environment. Other hurdles include a fuzzy definition of what sustainability really means for a business; lack of detailed information on projected costs, investments and revenues related to ESG (Environmental, Social, and Governance) issues; and a belief that fiduciary duty means asset managers should search for higher returns, regardless of impact on society.

In my paper with Heiko Spitzeck, we go over the valuation of a sugar manufacturing firm that was looking towards investing in two sustainable (or less unsustainable) business practices. The first was the use of refuse from the production process to produce energy, and the second a shift towards organic sugar. I want to revisit the process of valuing the company, going step by step so people can easily replicate it to other projects involving sustainable practices.

The valuation process of a privately-held company is usually done through the creation of a business plan with reasonable assumptions about cash flow inputs. It is essentially the same as the valuation process of public-listed companies. Yet, it is easier to acquire information on listed companies, so assumptions on future cash flows need to be even more explicit in the case of privately-held companies. Here, the company is a small sugar manufacturer in the Midwest of Brazil. First, let’s consider the valuation of the “business as usual” scenario.

Some background on the company and its business model is warranted. The company produces white sugar in Brazil. It has seven year contracts with farmers who supply sugar cane. The firm is located in a frontier region in which the industry is expanding, with productivity that is lower than in the main producing regions in the country, but has been growing in the last few years at 1% a year. Property rights in Brazil are secure, and the company does not face major political and social risk (such as society revoking its license to operate). It has all legal permits and the region in which it operates is a frontier but legal area for farming sugar cane and establishing an industrial facility for sugar manufacturing. Today the firm produces 40,000,000 pounds of sugar a year, and is expanding towards 70,000,000 pounds in 5 years due to planned investments.

The assumptions for the valuation of the company are:

Cash-flows follow below. Enterprise value is US$ 9.67 million. You can fiddle with the Excel file to see the effect of changes in the assumptions.

This is a very simple valuation, with no bells and whistles (unleveraged vs. leveraged beta; industry-wide beta; regression-derived cost of equity, simulations of cash-flows volatility etc). Hypotheses are explicit but ad-hoc. Such assumptions are related to cost of equity and debt, among others. I am less interested in precision than in showing how to incorporate ESG issues in valuation models.

For the case of sustainable (or less unsustainable) production, the focus is on two changes from the usual way that the company produces sugar: bioenergy production from sugarcane bagasse, a by-product of the production process; and the addition of a small line of organic sugar (less than 5% of the firm’s output).

For the case of bioenergy, assumptions regarding necessary investments and cash-flows are:

Cost of capital and sustainability, a digression.

We will see later how most, if not all, of the value created by energy production is due to the reduction in WACC, which may seem like a strong assumption at first, or an idiosyncrasy of the Brazilian market. Interest rates in Brazil are notoriously opaque, as most industrial companies finance themselves with a mix of regular commercial banking debt, funds from BNDES (one of the largest development banks in the world, disbursing over U$ 100 billion per year), other agencies, bonds, and international markets. There are subsidies for investors who purchase corporate bonds from companies which invest in infrastructure projects, and all sorts of different subsidies. BNDES loans represent over 20% of total loans, and 12% of GDP in 2014. 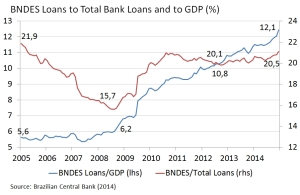 Compared to other countries, Brazil’s capital markets are relatively inefficient in providing funds for non-financial companies. Corporate bonds are relatively new and illiquid, and only surged in the last few years due to subsidies to investors.

Firms in Brazil are financially constrained, like in most of the developing world, which impacts investment and financing decisions. Cost of capital is high, but in most emerging countries there are different subsidized lines of credit, which are usually conditional on different industry-specific of firm-specific aspects. One such increasingly important aspect is the social responsibility and sustainability aspects of non-financial companies. In 2006, the Ministry of Environmental Protection, Peoples’ Bank of China, and China Banking Regulatory Commission developed a green credit policy, which was supposed to increase capital costs for heavily polluting industries and decrease it for more sustainable ones. Its major success story is the development of the Chinese solar industry (which received other subsidies as well, such as the Clean Development Mechanism), but there is no evidence that the cost of capital of heavily polluting industries actually fell. Even so, government-sponsored initiatives are at work, in China and other developing countries, albeit not necessarily devoid of green washing.

These examples from Brazil and China are relevant because companies in emerging markets that are financially constrained can use sustainability to leverage investments in sustainable practices. Such strategies can reduce the cost of capital in a much more significant way than we capture here, with a modest assumption of 0.2% reduction in the weighted average cost of capital.

The Sustainability Delta, an example

The idea behind the sustainability delta is to capture value-enhancing opportunities due to sustainability-based investments. Coming back to the valuation of the sugar manufacturing firm, with its current infrastructure, it can easily produce up to 5,000 pounds of organic sugar a year with minimal investments, a coverage rate of less than 1.5% of total production. The firm could choose a larger output, but that would involve distribution, marketing, and investment risks. Assuming no costs for introducing the product or additional marketing, a strong but realistic assumption given the distribution channels already in place, we assume the following measurable impacts:

The valuation, incorporating bioenergy and organic sugar, follows below. You can easily change the assumptions and see what happens if you want to fiddle with the original excel file. 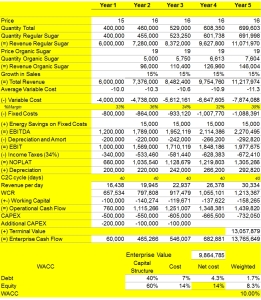 The Sustainability Delta is the difference between the two valuations (around 2% of enterprise value). Most of the savings come from the reduction in WACC. We are not primed to believe that sustainability offers value-enhancing opportunities for companies, but the example should provide a path to incorporate sustainability-related investments into the cash flow profile of a non-financial company. Of course, the example of a sugar manufacturer is an easy one: a homogeneous product, well-defined production change, and the existence of a reduction of cost of capital opportunity. Even though reality is fuzzier than this simple example, there should be no major constraints to applying regular valuation techniques to deal with ESG risks and opportunities.

Commercial banks are trying to capture such opportunities, while impact investing is based on the idea that one can make money and present a positive social impact at the same time. Financial markets can become greener from the inside, but only if we bridge the gap between fiduciary duty and value-enhancing ESG investments.

3 thoughts on “Valuation and Sustainability, an example.”